I can not believe it is time to say goodbye to these two. I know it isn’t goodbye forever, because I know how much they love our country and they will continue to work and fight for it, but it is goodbye for now. I also know some of my readers are not fans of the Obamas and that is okay, but I am. I am proud to have voted for him twice. I am also extremely honored and grateful to have lived, as an adult, during his presidency.

I have adored watching these two love each other. To see her love and support him and see him swoon and respect her has been beautiful. They see their role as major players (which they should, they are the first couple!) and they have excelled at showing their country the importance of love, the importance of family , and most of all the importance of respect for all.

Obama has accomplished goals that I will always appreciate as an American citizen. Fighting for climate change, fighting for gay rights, fighting for women, just fighting. He tried to pass a law against congress being involved in insider trading (which is WAY illegal for us regular folks) but it got denied (yes, those people in the higher seats can do it legally!) He humanized being a politican the best he could and I will always be grateful for all of those things.

This will be a sad week for many of us. But if I have learned anything from my president it is this… have hope. Believe in it. Believe in ourselves and our fellow Americans. Believe in kindness and love. Believe that we can. I have no idea what the future holds as far as politics are concerned. As a female, a member of the middle class, a mom to young children and a strong believer in so much our new president is against, I am scared. But as someone who has learned in 8 years that good things can happen, I am hopeful.

Thank you Barack and Michelle. For giving me 8 years of your life to fight for so many of ours. I can not wait to see what the future holds for you and your incredible family. Yes we can. Yes we did. Yes we can. 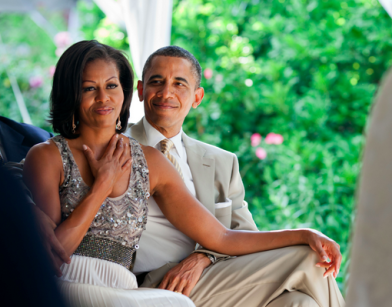